A depiction of the 2020 film Tenet, by Christopher Nolan, showing an hourglass, thematic to time travel, the word "Tenet" going in both directions, thematic to the palindrome nature of the Sator square, and a diagram showing two arrows of time arising out of a singularity, themed on John Wheeler's "entropy inversion" ideas.

In films, Tenet (film) (LH:2) is a 2020 science fiction film by Christopher Nolan, themed on a mixture of time travel, entropy inversion, and the Sator square.

In 2020, Christopher Nolan released the film Tenet, in which a character called the "protagonist", who basically is a man with no name, travels backwards and forwards in time, based on the principle on "entropy inversion", loosely based on John Wheeler's 1939 to 1989 theories, all scripted around plot that has names based on the mysterious 50AD "Sator square", e.g. the name of the film "Tenet" is the word cross of the square, and the film opens at the "opera", another word in the square.

The following gives some idea as to how the Sator square is used in the film:

The Sator square, itself, is benben stone isopsephy cipher, symbolic of the location of the rebirth of the phoenix.[3] It is doubtful, however, if Nolan had any of this in mind, when he wrote the script?

Nolan also says the anonymous nature of the "protagonist" was themed on Sergio Leone's 1960s "man with no name" film technique and the 1967 Prisoner TV show, where prisoners have numbers as names, which allows for focus on the here and now. Nolan also explains that the "timeline" of the protagonist is what viewers follow throughout the film, and that his time line can go forward in time, or be "inverted" backwards, via a turn-style. 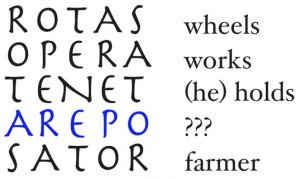 A first draft "basic" attempt, by the YouTube channel LatinTutorial (2015), to render the Sator square in straight Latin, which seems to convey little meaning?[4]

The ordering of the letters of the Greek alphabet, from alpha [α], the beginning, to omega [ω], the "end", the Hebrew alphabet, Latin alphabet, aka "alpha and omega", and hence in the modern English alphabet, derived therefrom, is based on the the Egyptian cyclical solar creation cycle. This is played out at the end of the 2020 film Tenet, by Christopher Nolan, as follows:

Although difficult to conjecture, in respect to reading Nolan's mind, reading the mind of the Greek who situated the alpha-omega cypher-based alphabet, along with the admixture of the Horus as sun god and Ra as sun god mythos combinations of the Egyptians, the one thing that comes to mind, reading the above dialogue, is the "getting on the boat of Ra" cyclical re-occurrence. One example of this is the Hindu "samsara" concept, derived from Ra-based mythology, via the Brahma rescript, wherein the soul of the person becomes freed from cyclical return; this seems to play out in the character Neil saying, at the end of the film, that he is going to take one more crack to saving the world, or "run at existence", or something along these lines. 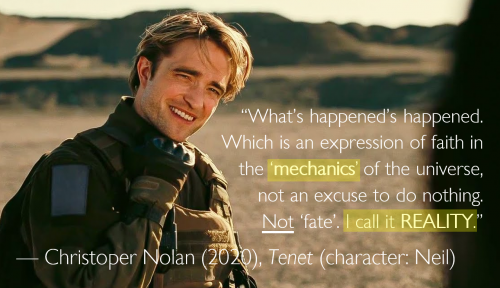 The ending scene, where the character tells the protagonist, his "faith in the mechanics of the world or universe" motto.

The following are quotes from the film:

“What’s happened’s happened. Which is an expression of faith in the ‘mechanics’ of the universe [world], not an excuse to do nothing. Not ‘fate’. I call it reality.”

The following are quotes on the film:

“I usually have an ‘idea’, in respect to the title of a movie. In the case of Tenet, I had the title in mind very early on, in fact years ago. The fact that it was a palindrome was the jumping-off point. It was also what the word means, the notion of ‘belief’.”