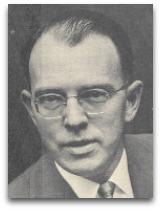 In 1968, Wooldridge, in his Mechanical Man: the Physical Basis of Intelligent Life, attempted to explain "life", mind, and consciousness, via reduction to "physics", generally modeled on computer model analogies.[1]

Wooldridge's first error, is his statement that organisms and or "life" started when large organic molecules formed "droplets" formed, via a process of "accidental" linking (pg. 22) of several molecular fragments. Reactions do not happen "accidentally". Next, he says that numberless "random collisions" (pg. 23), occurring among the molecular fragments of the primordial sea, in the "prehistory of life", resulted in catalytic molecules. Here, firstly, he is trying to sell the "blind random chance" model. This model, which was worked out ad nauseam by Richard Dawkins, is defunct. The anti-chance philosophy is the correct view of things. 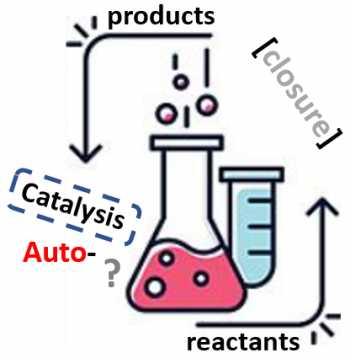 Wooldridge, in his zeal to sell a reductionist-physics based model of "life" or "intelligent life", as he phrases things, employs "chemical perpetual motion", pictured above, wherein the "catalyst" becomes the magical ingredient, via the phrase "auto-catalysis", or later variants, such as "autocatalytic closure", (Kauffman, 1995), that allows for a "end-over-unity" chemical reactions, where some purported-to-exist "thing", namely "life", comes out of the reaction, or is found in the products, which was not there (in the reactants) in the first place; all of which defies the basic laws of chemical thermodynamics.

He then says that sooner or later "autocatalysis" would have appeared (pg. 23). The auto-catalytic origin of life model, which was worked out to its fullest argument by Stuart Kauffman (1995), also is a bankrupt model. It amounts to perpetual motion at the chemical reaction level. The following is chemical perpetual motion:

“Sooner or later the phenomenon today known as ‘autocatalysis’ would have appeared. In autocatalysis one of the products of the reaction stimulated by the catalyst is more of the catalyst itself. But since auto-catalysis would have provided the original droplet with many catalytic molecules instead of just one, some of the smaller, ‘baby’ droplets into which the ‘parent’ fragmented would likely have contained some of the all-important catalytic material causing them to embark on the same kind of chemical growth activities that had previously been the specialty of the parent. By such developments, droplets, that started as ‘inert 'bags of chemicals’, cold slowly lead to structures with properties of growth, metabolism, and reproduction at least crudely similar to those exhibited by modern single-celled organisms”.

Here, the phrase "would likely have contained some of the all-important catalytic material" belies ignorance. Catalysts, by definition, do NOT take part in a chemical reaction. Catalysts do not become a component of the products or "baby droplets". Wooldridge, on this perpetual motion platform, then jumps to evolution:

“Once the first ‘autocatalytic droplets’ appeared, they must have quickly given rise to a major population explosion. For each ‘baby droplet’ would ultimately have reproduced more of its own kind when growth led to its own instability and disintegration.”

He then says that a few thousand generations of this, would have led to "almost life-like organizations of matter".

“It is not reasonable, of course, to assume that only one type of autocatalytic droplet developed and prospered. Various self-aggrandizing chemical cycles were physically possible, and were doubtless discovered by nature's random processes.”

Here, we see more errors. First, "self" is a violation of the principle of inertia. Second, nature does not operate "randomly". Third, the premise of "auto-catalytic droplets", or reactants that contain their on catalysts, enveloped into a liquid sphere, is science-fiction. Fourth, he then says that "mutations" or "accidental changes in molecular structure", would have eventually led to "new species", and a primitive form of evolution, semi-envisioned by Darwin.

Wooldridge, after basically outline a pure “strict physical determinism”, from all of human behavior, in his his one-page section on “religion”, of his §19: Social Attitudes, leaves wiggle room for god, as follows:

“This is not to say that ‘complete atheism’ will be required. We have already observed that well science seems well on its way to the elimination of basic unlawfulness from human experience it cannot eliminate the underlying mystery. There will be no reason why the term ‘god’ cannot still be used to denote the seemingly inexplicable origin of the laws and particles of physics.”

Wooldridge, prior to this, says: "obviously there is no room for a ‘personal god’ in a world that is rigidly obedient to inexorable physical laws.

In 1953, Wooldridge, as president, and Simon Ramo, as executive vice president, started the Ramo-Wooldridge Corporation, which by 1975 was charged with the task of running the technical end of the US Air Force ballistic missile program, and was named by Time magazine as America’s fastest-growing electronics company.[2]

The following are quotes by Wooldridge:

“The appealing simplicity of physics extends to another of its features: it's absolute orderliness. The laws of physics are never broken. In the realm of physical and chemical phenomena every detailed event, whether it is the formation of a new galaxy or the fall of a raindrop, is the lawful effect of causes which are themselves the lawful effects of other causes, and so on, going back ultimately to the fundamental particles and the laws of the universe. Even the existence among the laws of a principle of indeterminacy limiting the precision with which the future can be predicted does not permit entry of caprice into the world of the physical scientist. Within a calculable and frequently very narrow range of uncertainty, the future is completely determined by the past. Given the laws and the particles, all else follows inexorably.”

“There are ‘pleasure centers’ as well as ‘punishment centers’. When a wire electrode is implanted into such a center in a rat, for example, and a sort of telegraph key is provided whereby the animal can self-administer pulses of electricity to its brain, it will quickly learn to pound away at the key thousands of times an hour. In such experiments animals have continued to such incessant self-stimulation for 24 to 48 hours, stopping only when physical exhaustion made further operation impossible. And on being put back in the cage after a few hours of sleep, with food in one corner and the key and the other, the hungry animal has been observed to ignore the food, dash to the key, and indulge in another orgy of self-stimulation!”

“A state of consciousness whose existence and properties are completely determined by the operation of the laws of physics in the material of the brain, and which experiences death and rebirth several times a minute, what appear to leave conventional religion with very little to work on. With no independently surviving ‘soul’ to reward or punish in an afterlife, there can be no purely religious compulsion toward acceptable social behavior. Indeed , the strict physical determinism underlying the machine-like nature of man will render impossible traditional judgments as to who should be rewarded and who punished, even if there should be a suitable object on which to carry out the sentence. ”