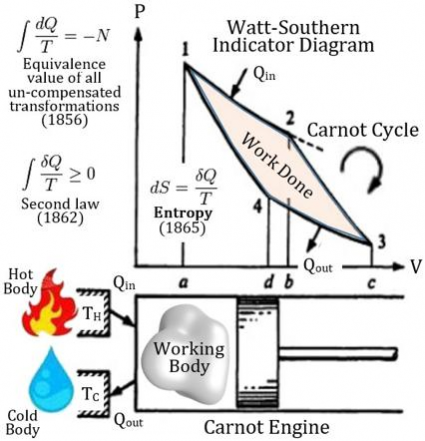 The basic outline of the Clausius cycle, wherein, wherein the unit or quantity of heat δQ is defined as TdS, and at the end of the cycle, a "change" occurs, in the working substance (or working body), quantified by the equivalence value of all uncompensated transformations.

In cycles, Clausius cycle is the Carnot cycle (Carnot, 1824), which is a mathematical elaboration of the Lavoisier cycle (1783), reformulated such that the the "caloric" model of heat is replaced with the "entropy" model of heat (Clausius, 1865).[1]

In 1679, Denis Papin built his "Papin digester" or "engine for softning bones", a type of pressure cooker that cold basically convert any sold object into the liquid state.[2]

In 1690, Papin introduced his "Papin engine", a theoretical heat engine, which is the basis for all modern steam engines.

In c.1730, Hermann Boerhaave, in his chemistry lectures at Leyden University, introduced the concept of the expansion of the volume of bodies by heat as a general law of nature, demonstrating this law via his famous ball and ring experiment.[3]

In 1783, Antoine Lavoisier, in his Memoir on Heat, co-authored by Pierre Laplace, using the model of heat defined as a "caloric" particle, and building on Papin (1679) and Boerhaave (1730), introduced the concept of a "cycle" of operations, wherein a body first expands, via the addition of heat, then contracts, via the removal of heat, the body returning to its exact original "state", of volume temperature and pressure, at the end of the cycle of operations, with complete conservation of the caloric particle, i.e. same number of caloric particles went into the body, during the expansion phase, as went out of the body, during the contraction phase.[4]

In 1824, Sadi Carnot, in his On the Motive Power of Fire, building on Papin and Lavoisier, introduced the "Carnot cycle".

In 1865, Rudolf Clausius, in his Mechanical Theory of Heat, building on Carnot, William Thomson, and James Joule, usurped the caloric model with the entropy model of heat.[1]

“Clausius Cycle. In the actual operation of the steam-engine, it is impossible even to approximate to the Carnot cycle, mainly because the heat is not supplied isothermally to the working substance, but is added at all temperatures between that of the feed water and that of the steam in the boiler. We may, however, describe a process known as the ‘Clausius cycle’, which corresponds to the ideal operation of an actual steam engine, and, since it may be realized at least theoretically, forms a better standard of excellence than the wholly unattainable Carnot cycle.”