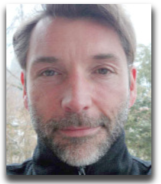 In 2012, Keevill started a WordPress blog entitled “polyhistornaut”, from Greek polyhistor- meaning “greatly learned, universal thinker, polymath” + -naut meaning “sailor, voyager”, meant to categorize a “curious modern cosmopolitan” with access to all human knowledge at one’s finger tips.[1] The following image, a summation rendering of his blog banner, is what seems to be the gist of his blog:

An attempt to synthesize or bring a "universality" to: neuroscience (brain or mind), mechanics, humanities (or humans), physics, biology, and chemistry, which will yield something [?] down the road, or something along these lines.

In 2016, Keevill, in his “Sociophysics: the Last Science”, cites the following passage by Comte:

“Newton showed that the mutual action of the bodies of any system, whether of attraction, impulsion, or any notion other, – regard being had to the constant equality between action and reaction, – cannot in any way affect the state of the center of gravity; so that if there were no accelerating forces besides, and if the exterior forces of the system were deduced to instantaneous forces, the center of gravity would remain immovable, or would move uniformly in a right line. Alambert generalized this property, and exhibited it in such a form that every case in which the motion of the center of gravity has to be considered may be treated as that of a singular molecule. It is seldom that we form an idea of the entire theoretical generality of such great results as those of rational mechanics. We think of them as relating to inorganic bodies, or as otherwise circumscribed, but we cannot too carefully remember that they apply to all phenomena whatever; and in virtue of this universality alone is the basis of all real science.”

“It should not escape the reader’s attention that in this passage (Positive Philosophy, pg. 129) Comte has effectively, albeit figuratively, plotted a graph of dynamically interacting point-states. The interactivity and cooperativity of massive bodies within a solar system or chemical reactants within a flask, both represent physically complex systems of dynamic social interaction – i.e. both are sociophysical systems. Implicit in this epistemological condensation is the fact that sociophysical systems are not necessarily ‘alive’, or ‘biotic’, or even ‘organic’.”

Here, we see Keevill teetering into the domain of abioism.

In 2017, Keevill, in his two-part "The Fundamental Nature of Science and Religion", seems to have employed Newton as a role model, and how he said that truth his a better friend to him that Plato.[4]

In 1990s, Keevill a degree in the “life sciences” at Open University, UK, with emphasis[5] on microbiology and macrobiology, and a degree in biotechnology, at University of Ljubljana.[6] Keevill's current research topics include: theoretical and practical explorations of physical and social fundamental universal principles, the phenomena, histories and processes emerging from them.