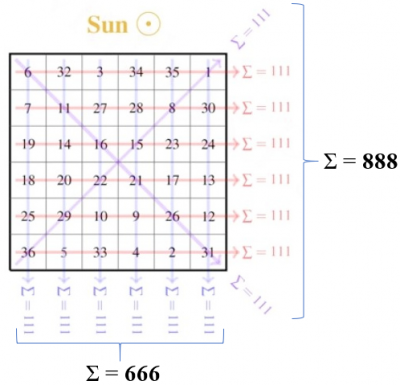 A depiction of the "solar magic square", i.e. the sun defined as a magic square, wherein we see that the sum of the six rows equals "666", and whose six rows and two diagonals equals "888":[1]

In numbers, 888 (LH:6), i.e. eight hundred and eighty-eight, is the circumference of a circle with a diameter of "282" (NE: bios); is a number found in the "string ratio of the whole tone" in the fraction 0.888 (Fideler, 1993); the sum of the six rows and two diagonals of the solar magic square; and the gematria value of the Hebrew phrase: "god came to earth in the flesh" (אלהִים בּוֹא ארץ בשּר); and the isopsephy value (NE) of the name Ιησους, i.e. "Iesous", or Jesus,

In 520BC, Pythagoras, having studies mathematics in Egypt, was said to have been employing magic squares[2], e.g. in his proofs of the Pythagorean theorem. An example of this is pictured adjacent.[3] In this period, someone began to associate a magic square for each of the seven wandering stars, i.e. the sun, moon, and the five visible planets: Mercury, Venus, Mars, Jupiter, and Saturn; hence, either the "solar magic square" was devised either by Pythagoras or he learned it from the Egyptians.

Presumably, this 888 / 666 solar pattern, is symbolic, in some way, of the ancient 3,200 pre-Dynastic Horus (sun) vs Set (night) battle motif, Horus as the sun and Set as the beast.[5] Little, however, is known about Egyptian mathematics, other than that fact that it was where the Greeks learned their mathematics.

A circle with a circumference of "888", which is the numerical equivalent value (NE) of the name "Jesus" (or Ιησούς), has a diameter of "282", which is the NE-value of the term "bio" (or βίος), the root term of biology, meaning that biology is the study of the diameter of Jesus, in plain speak.

The isopsephy value of the term "bio", via the Greek βίος, is numerically equivalent to "282". With reference to the solar magic square, the number "282" is the closest whole number diameter, for circle with a circumference of 888, as shown below:

Hence, in translation, the term "bios" is a solar magic word.

In 520BC, Pythagoras, in addition to using magic squares, is also associated with the mathematical parable of the geometry of "measure of the fish"[6], amid which, the number "282", the isopsephy value of βίος (bio), supposedly, can be derived from the solar magic square; one take on this is as follows:

“The names Jesus (888) and Christ (1480), by gematria, both are related to the two Greek words for life: ‘zoe’ and ‘bios’. Each diagram, shown below, also brings out the cosmological number 1332 (666 x 2) which is, like 888 and 1480, obtained from the magic square of the sun. The whole arrangement is one of logos, ratio, and harmony, symbolizing Jesus the Christ as the cosmic word of life and light.”

The image shown adjacent, is a modified variant of the cover of Geoff Roberts' 2011 book Jesus 888, shown with added annotation.[8]

The significance of the 1000, as the unit size of the so-called divine solar circle is said to represent the "divine monad", thousand equivalent, in the Greek ratio system, to "1", as David Fideler (1993) sees things:

“Helios, 318, the Greek name of the sun, is derived from the ratio of the circle, for the reciprocal of π is .318. In other words, a circle measuring 1000 units in circumference (representing unity) will have a diameter of 318 units. In music, 0.666 is the string ratio of the perfect fifth, while 0.888 is the string ratio of the whole tone. The Greeks did not use the decimal point at all, and, in every instance where gematria values are based on mathematical ratios, the ‘decimal point’ has been moved over exactly three places. In other words, while we define these ratios in relation to ‘1’, we conclude that the Greeks defined these ratios in relation to ‘1000’, which represents the same principle, the monad or unity, the ineffable first cause.”

Other phrases numerically equivalent to 888 include:[9]

The following equates to 8880:

The number 888 also, supposedly, is the sum of the 24 letters of the Greek alphabet:

“To the Christian Gnostics, 888 was sacred because when all twenty-four letters of the Greek alphabet are added together, the sum is 888, symbolizing the totality of creation.”

It remains to be seen, how this last conjecture results?

“Now Jesus possesses this ineffable generation. From the mother of all things, that is, the first Tetrad [4], there came forth a second Tetrad [4], after the manner of a daughter; and thus an Ogdoad [8] was formed, from which, again, a Decad [10] proceeded: thus was joined a Decad and an Ogdoad. The Decad then, being joined with the Ogdoad, and multiplying it ten times, gave rise to the number eighty [88]; and again, multiplying eighty ten times, produced the number eight hundred [800]. Thus, then, the whole number of letters proceeding from the Ogdoad [multiplied] into the Decad, is eight hundred and eighty-eight [888]. This is the name of Jesus; for this name, if you reckon up the numerical value of the letters, amounts to eight hundred and eighty-eight [Jesus, Ιησους (Iseous) = 888]. Wherefore, also, the alphabet of the Greeks contains eight Monads [1s], eight Decads [10s], and eight Hecatads [100s], which present the number eight hundred and eighty-eight [888], i.e. Jesus, who is formed of all numbers; and on this account he is called Alpha [α] and Omega [ω], indicating his origin from all.”

“The Greek name Iesous, or 10 + 8 + 200 + 70 + 400 + 200, is an artificial and forced transliteration of the Hebrew name Joshua, which has been deliberately constructed by the gospel writers to make sure that it expresses the symbolically significant number: 888.”