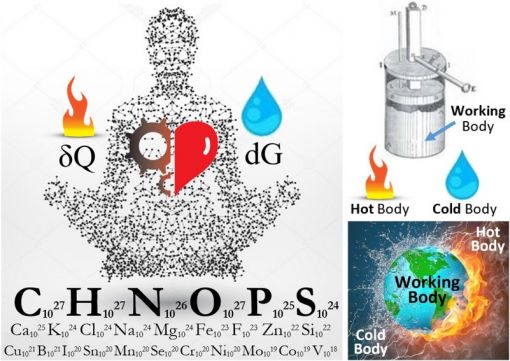 A synopsis of Hmolpedia: a human, as a powered 26-element animate thing, with a unique human molecular formula, seated between an inexact heat

and an exact Gibbs energy

differential, overlaid with a mechanisms of the passions icon (see: Hmolpedia logo), next to the Carnot engine, and the earth surface "system" as Clausius cycle model of things, all governed by the universal laws of thermodynamics.

Hmolpedia: an A to Z Encyclopedia of Human Thermodynamics, Human Chemistry, and Human Physics, is a pedia, or child-like (Newton, 1727) compendium, collating "manifold avenues" (Roegen, 1971) of information, related to the study of people, individually, or in bulk – a mass of humans viewed as a reactive "hmol" amount of people – from a physico-chemical point of view, namely the "advanced perspective" (Lovecraft, 1922) view of things, discerned via the universal "thermodynamic lens" (Donohue, 2014), its acuity defined by the first and second law, as the top 2000 geniuses and minds tend to intuit.[1]

Hmolpedia, retrospectively, can be viewed as the reference knowledge center of Lange's The History of Materialism (1865), the “mechanistic school” of contemporary sociology (Sorokin, 1928), the Harvard Pareto circle (Henderson, 1932-42), the 100+ “two cultures” proto-sciences, or human chemical thermodynamics (HCT) in future focal apex; the latter as HCT prodigies tend to see things. The atom favicon

, is thematic to the view that humans are powered bound states of 26-elements, a collection of "thinking" or "tormented" atoms (Voltaire, 1755); a powered animate thing, moving about in the void, in modern terms:

“All things are the result of atoms and void.”

The Hmolpedia logo (human in lotus position) is thematic to the view of one's "self", as eddy-like atomic geometry, or powered CHNOPS+20E reactive, its various "states" of existence, governed by the operations of inexact heat

differentials, defined within the "system", on a solar-heated substrate surface: