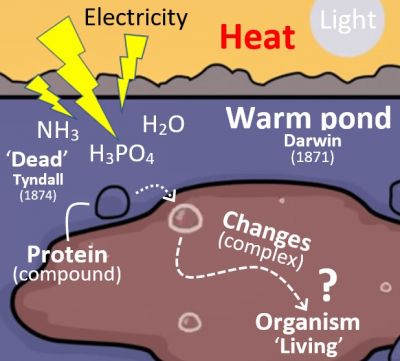 An artistic reconstruction of Darwin’s 1871 “warm pond” letter description of the possible origin of the life.[1]

In 1859, Darwin, in his Origin of Species, showed that animals have evolved over time via a process of natural selection.

In 1871, Darwin, in a letter to Joseph Hooker, speculated that life started in a warm lighted chemical bond, filled with ammonia and phosphoric salts, that was electrified or struck by electricity, which thus enacted the formation of a "protein compound", which, following more "complex changes", resulted in "living creatures"; the full letter is as follows:

“I return the pamphlets, which I have been very glad to read.— It will be a curious discovery if Benjamin Lowne’s observation that boiling does not kill certain moulds is proved true; but then how on earth is the absence of all living things in Pasteur’s experiment to be accounted for? I am always delighted to see a word in favor of ‘pangenesis’, which some day, I believe, will have a resurrection. William Dyer’s paper: ‘On Spontaneous Generation and Evolution’ (1870), strikes me as a very able Spencerian production.
It is often said that all the conditions for the first production of a living organism are now present, which could ever have been present.— But if, and oh what a ‘big if’, we could conceive in some warm little pond with all sorts of ammonia [NH3] and phosphoric salts [H3PO4], light, heat, electricity, etc., present, that a protein compound was chemically formed, ready to undergo still more complex changes, at the present day such matter would be instantly devoured, or absorbed, which would not have been the case before living creatures were formed.”

The gist of this Darwin warm pond model, is shown below:

Darwin's warm pond model was later expanded or rather elaborated on, in more elaborate physio-chemical language, in the so-called "primordial soup"[3] models of Alexander Oparin (1924) and John Haldane (1929).

In 1952, Stanley Miller, under the direction of Harold Urey, synthesized amino acids, the components of “proteins”, specifically: glycine, α-alanine, β-alanine, and possibly aspartic acid and α-amino-n­-butyric acid, starting from a reactant mixture of methane

gases, thought to have been prevalent in the archean period (4-2.5 BYA), which was "sparked" for several days.[4] Most, in the decades to follow, classified this as "proof" of Darwin's warm pond model.

The basics of the "Goethe model" as the characters of chapter four of Goethe's Elective Affinities (1809) dialogue about.

The Darwin model, can be compared, as shown above, to the Goethe model (1809), aka chemical reaction metamorphosis, according to which, after Goethe (1784) had already found skeletal proof that humans and animals have evolved or morphed (see: morphology) from a common ancestor;

“I have found neither gold nor silver, but something that unspeakably delights me — the ‘human Os intermaxillary’!

which was followed by his “Metamorphosis of Plants” (1790), then “Metamorphosis of Animals” (1806), culminating in his "Metamorphosis of Humans", presented in the cryptographic cypher-loaded form of a novel, called Elective Affinities, wherein each character is a different chemical, A, B, C, and D, who react, bond, and debond with each other, forming, morphing, reproducing, or evolving child through the chapters, who discuss their origins back through monkeys to chemicals, eventually getting to the life vs non-life crux of the problem, which is addresses as follows:

“You ought yourself to see these creatures, which seem so dead, and which are yet so full of inward energy and force, at work before your eyes. You should observe them with a real personal interest. Now they seek each other out, attract each other, seize, crush, devour, destroy each other, and then suddenly reappear again out of their combinations, and come forward in fresh, renovated, unexpected form; thus you will comprehend how we attribute to them a sort of immortality—how we speak of them as having sense and understanding; because we feel our own senses to be insufficient to observe them adequately, and our reason too weak to follow them.”

This, in turn, can be compared to the Thims model (2007), aka Goethe + Darwin unified model, wherein things have evolved or rather chemically morphed over time, via the combined action of heat, light, and possibly electricity, to have synthesized animate things, NOT "living organisms" (an ergon that is alive) or "living creatures" (a god created thing that is alive), like bacteria, fish, apes, and humans, wherein the conditional term "life", classified as a defunct anthropism and or religio-mythology concept, is discarded (see: abioism).[6]