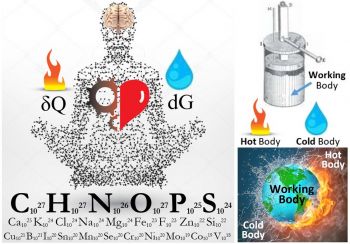 A synopsis of Hmolpedia: a human, as a powered 26-element animate geometry, shown above its human molecular formula, seated between an inexact heat

and an exact Gibbs energy

differentials, overlaid with a mechanisms of the heart or passions icon (see: Hmolpedia logo), next to a Papin engine, and an earth-surface "system" (working body), expanding and contracting daily, in Clausius cycles, all governed by the universal laws of thermodynamics.

Hmolpedia is an A to Z Encyclopedia of Human Thermodynamics, Human Chemistry, and Human Physics, aka the "hmolsciences", collectively named, themed on the "hmol" (Thims, 2007), from "mol" (Nernst, 1895), or mass unit amount of humans; an encyclopedia, in focus, on topics related to and surrounding the derivation of human chemical thermodynamics from first principles.

Hmolpedia, in short, is an information repository for the "manifold avenues" (Roegen, 1971) opened during attempts at the chemical thermodynamic study of existence, experience, being, becoming, and continuity, universally conceptualized. This subject matter is summarized by 390+ core terms used by 170+ key thinkers.[1]

The main vantage point used is the physico-chemical or "advanced perspective" (Lovecraft, 1922) look at things, wherein all activity and reactivity, hydrogen to human, as shown below (see: warm pond), is seen through the "thermodynamic lens" (Donohue, 2014), its acuity philosophically "grinded" by the first and second law of thermodynamics, as the top 2000 geniuses and minds have tended to intuit:

Hmolpedia, retrospectively, can be viewed as the reference knowledge center of collectively: Lange's The History of Materialism (1865), Sorokin's “mechanistic school” of sociology (1928), Henderson's Harvard Pareto circle (1932-42), or the two-cultures disciplines (100+) in general. The atom favicon

, is thematic to the view that humans are powered bound states of 26-elements, a collection of "thinking" or "tormented" atoms (Voltaire, 1755); a powered animate thing.

The Hmolpedia logo, i.e. atomic human in lotus position, is thematic to the view of one's "self", reconceptualized as one of a number of ever-changing electromagnetic mind states or wave pattens, found in a turnover rate based bound state atomic geometry, or powered CHNOPS+20E existive, is a thing whose various "states" of existence are discerned by the combined operations of inexact heat

differentials, and kinetics, give or take, conceptually defined within the "system", shown above, which is situated on a solar-heated earth substrate surface, expanded and contracted daily, in irreversible Clausius transformation cycles.